New Delhi: Sandeep Marwah president of Marwah Studios and also the Chairperson of International Childrenâ€™s Film Forum has been recently honored by another childrenâ€™s organization in Delhi for his sincere contribution to child welfare.

â€œSandeep Marwah has been in education for 23 years and has trained 12000 students in films, television and media. He started skill development program 23 years back and realized the need of the same much earlier. More than 1000 film shows have been organized on different occasion to teach students of more than 800 schools through good cinema,â€ said Nirmal Vaid present on the occasion.

Sandeep Marwah has initiated the projects of Clean India 12 years back and yoga teaching from last 23 years. Now he is also associated with Digital India, Clean Ganga, Start Up India, Stand Up India and other Prime Ministerâ€™s Projects.

He has been running 11 branches of Apna School for unprivileged students in 11 different slums of Noida. There are three disability centers running under the name of Pratyn under his patron ship. Large number of primary schools and training centers are taking guidance from Marwah.

Marwah has also created a special segment for children in Global Film Festival, Global Festival of Journalism, Global Literary Festival and now in Global Fashion Week. He has been continuously helping Children Film Society of Ministry of Information and Broadcasting, Government of India.

â€œI am honored that my efforts have been recognized by the organization,â€ said Sandeep Marwah receiving the award.

Convocation of Asian School of Media Studies at Marwah Studios

Tue Dec 27 , 2016
Noida: â€œEducation and skill development provided by the college must be upgraded with latest information when you are in the field to be in the books of your employer. The changes in the hospitality and fashion industry are tremendous,â€ said Dr R.P.Agarwal former Vice Chancellor and advisor to Shobit University […] 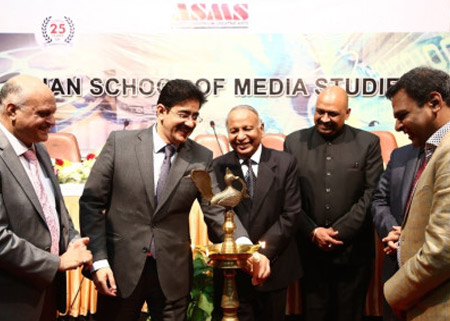