New Delhi: â€œNoida Film City is the fastest growing film city in the World established in 100 acres 75 acres outdoors and 25 acres indoors comprising of 16 studios, 350 channels being broadcast to 162 countries 24Ã—7 from this place. Approx. 17000 people are working in and around Noida in media in 3 shifts. We feel honored in inviting the founder Sandeep Marwah on stage,â€ citation read by the organizer.

Sandeep Marwah is honored for his untiring contribution to the field of films, television and media at a grand function organized by Edutainment Exhibition at Hotel Lalit at New Delhi. He has been the only producer in the World to produce more than 2000 short films.

The complete fraternity of film, television and media education was present there. Many young and established educational institutes were also honored during the function. 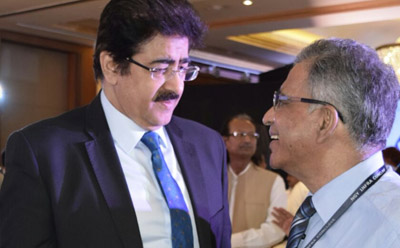