New Delhi: Renowned film personality and President of International Chamber of Media And Entertainment Industry Dr. Sandeep Marwah was guest of honor at the festival of films from Iraq at Habitat Centre.

“I on behalf of Indian Film Industry and ICMEI extend my heartiest congratulations to H.E. Dr. Falah Abdulhasan and his complete team for organizing the first ever film festival in India. Film is the best Ambassador of culture of any country. Iraq may not be a film producer of large films but Iraqi films has been acclaimed as good cinema and has brought many accolades and awards from International film festivals,” said Dr. Sandeep Marwah also president of Marwah Studios.

“I feel honored in announcing a scholarship for the deserving student from Iraq to learn cinema in India. We are ready for joint production of short film with Iraqi director. I would love to present this festival in Noida Film City,” added Marwah thanking Embassy of Iraq for inviting him for first festival.

T.S. Trimurti Secretary Ministry of External Affairs Government of India, G. Parthasarthi former Ambassador and President of Habitat Centre along with many Ambassadors and High Commissioners, Diplomats, film lovers and cinemagoers were present there for the inauguration of the festival and the screening of first film ‘The Sands of Babylon’ in Arabic made in 2013 for 92 minutes Directed by Mohamed Al-Daradji. The program was coordinated by Deepak Kapoor.

Fri Apr 5 , 2019
Noida: An Autism Awareness Day observed at Marwah Studios at Noida Film City to inform the depth of the problem to the media students of AAFT University of Media And Arts on 2nd April, a day decided by the United Nations. “While technological advances are continuous, there are still major barriers to the […] 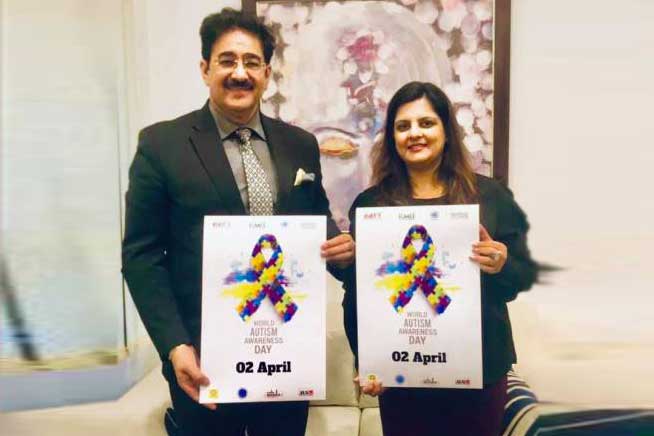