New Delhi: Sandeep Marwah need to be felicitated once again for bringing Dadasaheb Film Foundation Award to AAFT-Marwah Studios from Mumbai where he was honored in a grand function along with Akshay Kumar, Sonam Kapoor, Manisha Koirala, R.Balki, Konkana Sen and few others.

“I am honored that people all over India and abroad have recognized my efforts   one by one. It has taken me years of non-stop working in this field, which has brought me these laurels. You have to be honest to your profession all the time to get success,” said Sandeep Marwah President of Marwah Studios.

The event was attended by who’s who of Delhi Art, Cinema, Culture, Television and media fraternity.

Wed Jun 6 , 2018
Tashkent: The councilor and Director Sipra Ghosh of Lal Bahadur Shastri Centre for Indian Culture at Tashkent invited the International Media Personality from India Sandeep Marwah on his arrival at Tashkent on his state visit to Uzbekistan. The Director along with the Indian and Uzbek staff very well received Sandeep […] 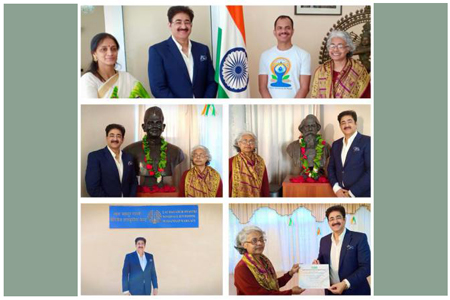