Mumbai: “I am thankful to each and every one who has contributed to the growth of Asian Academy of Film And Television in these last twenty five years of its existence,” said Sandeep Marwah founder, Promoter and President of AAFT during his trip to Mumbai.

“1993 We shot Bandit Queen Phoolan Devi for almost four months at Marwah Studios. That was another full length feature film shot at Noida, The film became internationally successful. We learned a lot from Shekhar Kapur, the Director of the Film,” said Sandeep Marwah thanking Shekhar for trusting him even at that time.

Marwah also extend his gratitude to Satish Kaushik for his continuous support by shooting films at Marwah Studios be it Badhai o Badhai, Prem, Khushi or his contribution towards film education by taking workshops with different batches of AAFT.

“I know Javed Sahib since 1982 and his consent as Member of the Academic Council has given us the opportunity to have screening of all the films he has written so far including Deewar, Sholay, Trishul, Mr India, etc.

AAFT has already started celebrating this year as Silver Jubilee Year. Large number of events has been planned through out the year.

Mon May 14 , 2018
Noida: The AAFT School of Cinema organized a film & music workshop for all those students who are keen in learning music for Cinema and its technics. An international star Andrew Fryer Dean of the School of Film, Music and Performing Arts at Leeds Beckett University took the workshop.  “Andrew […] 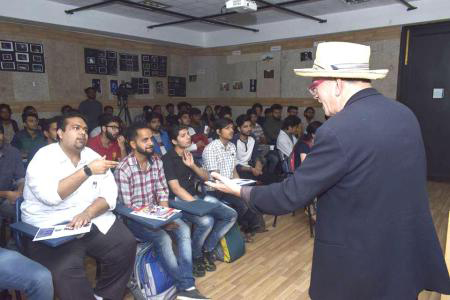