â€œThere is no place where Sandeep Marwah and his activities have not reached nationally and internationally. There is no person who can be compared to his way of working in this industry,â€ said Shyam Pandey recipient of Life Time Achievement Award talking to journalists from all over India.

â€œA man who has given International Day of Journalism to the World-12th Februaryâ€, representative of United Nations, Cultural Ambassador for many countries, founder of Global Film, Literary and Journalism Festival and uniting the World through Art and Culture is a trainer to trainers,â€ added Vipin Gaur Secretary of NAI.

The house together nominated and declared Sandeep Marwah as The International Media Guru. A plaque was handed over to Marwah jointly by the dignities present there.

â€œWhat a pleasure and honor to be part of media and entertainment industry. The industry is growing at the rate of 12 percent, 6 million people are associated and it is about to touch 1,80,000 crores business. You all are the representatives of this industry. I am humbled to receive the honor,â€ said Sandeep Marwah.

Tue Aug 16 , 2016
Noida Film City: The board meeting of Association of Asian Union And Asia Pacific Cooperation was held at Marwah Studios at Noida Film City. All the board members representing different segments of life were present there to contribute to the cause of Asian Unity. â€œWe have been working on the […] 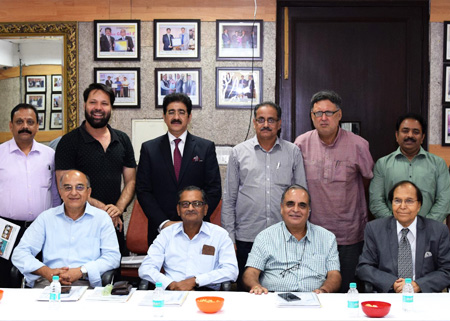