New Delhi: Sandeep Marwah President of Marwah Studios briefed the President of Republic of Cyprus H.E. Nicos Anastasiades with the length and breath of film business of India and formation of Indo Cyprus Film And Cultural Forum.

Marwah handed over the scholarship for the deserving student from Republic of Cyprus, for a short term course at the premier film school- Asian Academy of Film And Television, to the president as a gesture of friendship & goodwill.

The decision was taken during the meeting of Indo Cyprus Film And Cultural Forum with H.E. Demitrios A. Theophylactou High Commissioner of Republic of Cyprus to India informed International Chamber of Media And Entertainment Industry.

â€œIt is a good beginning from you. I am sure Indo Cyprus Film And Cultural Forum will work as the bridge between the two cultures of the countries,â€ said H.E. Nicos Anastasiades.â€œWe have designed numerous programs to bring the people of two nations close to each other,â€ added Marwah.

Sat Apr 29 , 2017
New Delhi: The President of Republic of Cyprus gave a special audience to the renowned film personality of India Sandeep Marwah during his visit to India at New Delhi. Sandeep Marwah President of Marwah Studios and also the president of International Chamber of Media And Entertainment Industry has been recently […] 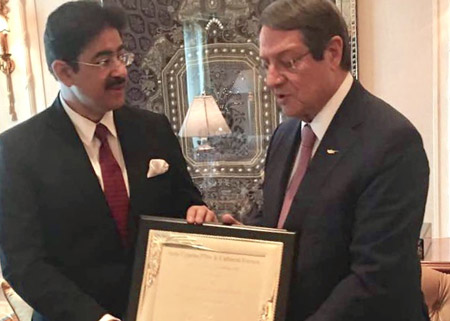