Cannes: “It is not only important but essential to high light India- the biggest film industry of the World. We make 2000 films in 28 official languages. 12000 theaters and approximately 15 million people watch cinema every day. We sell 5 billion tickets in a year. You can imagine the size of the industry,” said Dr. Sandeep Marwah President of Marwah Studios and ICMEI- International Chamber of Media And Entertainment Industry talking to international press at India Pavilion at Cannes International Film Festival, France.

The Minister of State, Ministry of Information and Broadcasting, Rajyavardhan Singh Rathore at Cannes International Film Festival inaugurated the India Pavilion on the second day of festival.

Situated at the picturesque seaside shoreline adjacent to the gigantic Palais des Festivals building, the India Pavilion is an essential and crucial corner where the hundreds of Indian film professionals can gather to make their presence felt and also where people from abroad interested in India can converge to cement their business needs in India.

Tue May 21 , 2019
Cannes: “Marwah Studios is the first professional Film Studios of North India. We have churned out 4500 television programs for more than 50 Channel. We are associated with around 150 feature films in 8 different languages. Around 5000 training films have been produced from the studios,” informed Dr. Sandeep Marwah […] 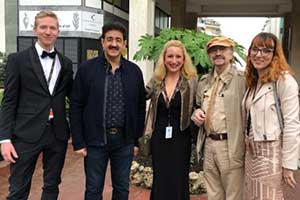