New Delhi: A glass blowing presentation was presented by Master Jiri Pacinek who thrilled the audience, gathered at a properly heated glass furnace at the Czech Embassy in Delhi on November 26th 2019 on the occasion of the event titled “The Story of Czech Glass”, by his virtuosity and craftsmanship.

Great Indian designer and glassmaker Reshmi Dey showed her talent and was just an excellent partner in the presentation. The Czech-Indian connection in a sector in which no one would expect could be an impulse to help Czech glassmakers enhance their visibility in the Indian market.

Productive net working of Czech glassmakers with Indian partners took place at the Embassy. “. Speaking on the occasion Ambassador Milan Hovorka said: ” “For our nation, Czech Glass is a matter of national pride. Its history dates back to the 13th century. Since then, Czech glass designers and manufacturers have belonged to the best in the world.”

“It was a wonderful gesture when Robert Halama, owner of the Halama Glass Company, which produced the figure in Zelezny Brod, presented a figure of Mahatma Gandhi to Mahatma Gandhi’s granddaughter Tara Gandhi Bhattacharjee.,” said Sandeep Marwah Chair for Indo Czech Republic Film And Cultural Forum

Commitment Is Key To Success- Sandeep Marwah at AAFT University

Fri Nov 29 , 2019
Raipur: Only those people have touched the heights of success who have shown commitment to their business and profession. It includes punctuality, regularity, sincerity and dedication. Learn you subject well at University and experience every activity during your study period, you will grow better,” said Dr. Sandeep Marwah Chancellor of […] 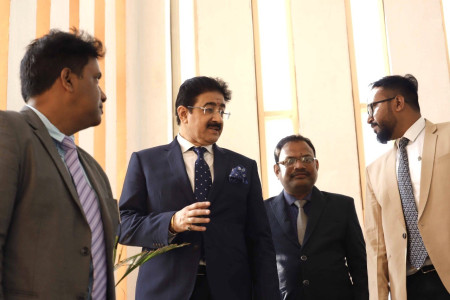