Gurugram: “People who have hundred excuses to complete the work is the downtrodden of the community, the ones who leave the work in between are second grade people and those who ready to face all sorts of hindrances and obstacles and complete their job are the first class people. They are the real achievers. And key to success is a very strong determination,” said Sandeep Marwah President of Marwah Studios at the award function of Garnet And Gold at Gurugram.

“It is a very proud moment for us when six World Record Holder Sandeep Marwah is here with us. His presence has added value to the awards. Thirty awards by Garnet and Gold are given to those who have excelled in their fields,” said Jacqueline Jindal President of the Society.

Thu Oct 4 , 2018
New Delhi: A National level meeting of a newly constituted body under the name and banner of NISHTHA and under the leadership of its president Dr. Gopal Ji was held at Youth Hostels of India at Chanakyapuri, NewDelhi. “The association has large number of volunteers retired from the government earlier […] 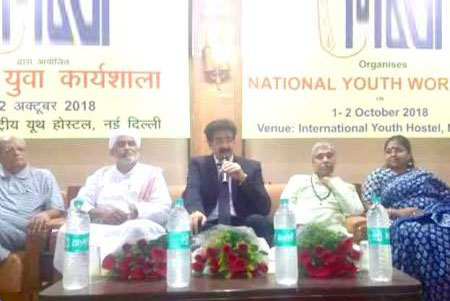