New Delhi: A well known media personality and President of International Chamber of Media And Entertainment Industry Sandeep Marwah was invited by the ASSOCHAM to deliver the key note address on media and entertainment industry at their annual program on “changing Pattern of Services Industry-Opportunities And Challenges” at Hotel Taj Mansingh.

Talking to the audience Sandeep Marwah briefed about the media and entertainment industry and said that we are the biggest film industry in the World and produces nearly 2000 full-length feature films in 28 languages. 12000 theatres and approximately 15 million people watch cinema every year. We sell 5 billion tickets every year and films are touching now a turnover of 15000 crores.

He also talked about print, radio, television, new media, events and media education in India. The session was followed by question answer, which lasted for quite some time.

Mon May 7 , 2018
Noida: ICMEI- International Chamber of Media And Entertainment Industry and Marwah Studios in association with AAFT- Asian Academy of Film And Television has already created numerous forums in relation to African Countries. “ Time has come when we should have a an African Union as a part of ICMEI so […] 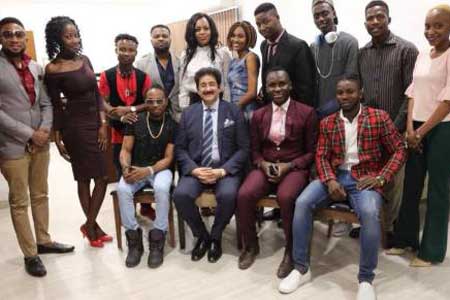