Hundred is a big number to quote and AAFT is attracting students from hundred countries is a commendable job. I congratulate you on this successâ€ said H.E. Dr. Lobsang Sangay Prime Minister of Tibet while unveiling the plate of 100 flags at Marwah Studio during 3rd Global Festival of Journalism Noida 2015.

AAFT is the pioneer film school in India ranking third biggest in the World, and first ten best film schools of the World. For value addition it is number one. AAFT is the only institution to have its own newspaper, Radio Station, TV Station, Research Centre, Film Club, Film and TV production house, Children, Women and Broadcasting Forum and also running its chamber of Commerce.

AAFT has churned out aproxmately12000 students from 100 nations of the World. The institution has its Peace Foundation and been associated with International Cooperative movement.

54 different media and allied organizations are working under the leadership of World-renowned media person Sandeep Marwah.

ICMEI And Embassy of Iceland in India Will Work Together

Wed Jan 6 , 2016
â€œWe have to begin from somewhere to add on to the betterment of our relations art and culture is the best and the fastest way. We are confident that ICMEI will play its role with great responsibilityâ€ said H.E. Thorir Ibsen Ambassador of Iceland in India on his meeting with […] 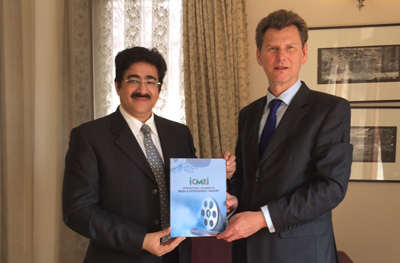