Noida: The inaugural edition of 1st AKBF Pro-fight event was launched by the Amjad Khan Boxing Foundation at the Marwah Studio, here on Friday. Bouts are all set to be held at Marwah Studio from 2pm onwards on Saturday in patronship with Sandeep Marwah the Founder, Noida Film City, and in presence of Chief Guest Manoj Tiwari Actor & Member Of Parliament. The newly launched boxing event will feature total 5 bouts including 4 Men bouts and 1 female bout.

The competition between the players will be in 5 different weight categories with bouts of 4 rounds of three minutes each. This competition amongst Pro-Boxers is an opportunity to participate and showcase their skills to the world. Professional Boxing Coach Chandan Singh and Naseem Ahmed have groomed these professional players for fight event.

“The ideas is to promote the game in India and make it more popular with the common people of India,” said Sandeep Marwah President Marwah Studios.

Tue Jun 5 , 2018
New Delhi: 51 Artist, 120 Paintings were displayed at AIFACS, New Delhi for seven days to motivate and encourage young artists who have recently finished their education and training in fine arts at NIFA. “What a pleasure to see better than a professional’s job in this collection of paintings today. […] 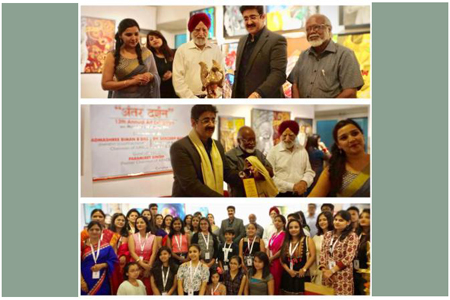