Prague: India has large number of historical monuments, which can be converted into tourist attraction; many of them are already very exclusive and special. We still need to learn from Prague to convert them to international taste & attraction,â€ said Sandeep Marwah Managing Director NFTC- National Federation of Tourism And Transport Cooperatives of India Limited during his visit to Prague at Hotel Kings Court.

Prague is the capital and largest city of the Czech Republic. It is the 14th largest city in the European Union. It is also the historical capital of Bohemia. Situated in the northwest of the country on the Vltava river, the city is home to about 1.4Â million people

Prague is home to a number of famous cultural attractions, many of which survived the violence and destruction of 20th-century Europe. Main attractions include the Prague Castle, the Charles Bridge, Old Town Square with the Prague astronomical clock, the Jewish Quarter, PetÅ™Ã­n hill and VyÅ¡ehrad. Since 1992, the extensive historic centre of Prague has been included in the UNESCO list of World Heritage Sites.

Prague ranked sixth in the Tripadvisor world list of best destinations in 2016. Its rich history makes it a popular tourist destination, and the city receives more than 6.4Â million international visitors annually, as of 2014. Prague is the fifth most visited European city after London, Paris, Istanbul and Rome.

Thu Sep 28 , 2017
Noida: â€˜The World needs Peace. Life is uncertain and other activities have made it more uncertain. Lets work together to bring in Peace to the World by extending love and unity through arts and culture,â€ said Sandeep Marwah President of AAFT & World Peace Development And Research Foundation at Marwah […] 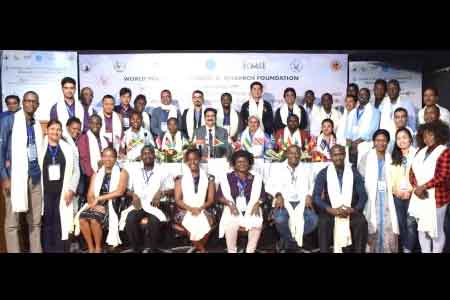