Speaking on the occasion Sandeep Marwah said that we have been closely associated with Polish Films as he was honored at Gdansk Film Festival for his five World Records and later invited to be on the International jury. He also apprised the students that Polish Films form a part of the curriculum of the studentsâ€.

Grabowski and Aneta thanked Sandeep Marwah for organizing the poster exhibition and screening of the films. Ashok Tyagi, Secretary General of ICMEI, gave an insight to ICMEI, itâ€™s working and how this chamber is associating with different countries by way of art, culture and films. Later, Oscar winning film â€˜Blueâ€™ by Krzysztof KieÅ›lowski was screened. The exhibition is open till Saturday, 2nd May 2015. Indo Polish Film Association of ICMEI powered the event.

Fri Jan 8 , 2016
Never seen this kind of enthusiasm in any part of the World, I have been to many film schools of the World. Nothing is missing in AAFT as far as education and training is concernedâ€ said Dan Chyutin a well-known filmmaker from Israel at the closing of workshop with cinema […] 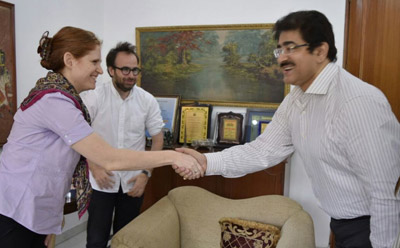