New Delhi: A delegation of members of     PHD Chamber of Commerce under the leadership of Rajiv Talwar President of PHDCCI met Prahlad Singh Patel the State Minister of Culture and Tourism, Ministry of Culture, Government of India at Transport Bhawan New Delhi.

The members of PHDCCI congratulated the Minister for being nominated as the part of Government and presented him with the tree.

D.K. Aggarwal invited the minister for the forth-coming program- Unity In Diversity- under Art & Cultural Committee-an annual art and culture awards-PHD Cultural Samman to be held on 12th July 2019.

“We will be more than obliged with the presence of Minister at the Samman function. These awards are to be handed over to the most deserving people of the country who all are contributing to the promotion of Indian art & culture,” said Dr. Sandeep Marwah also President of Marwah Studios.

AAFT Join Hands With Ministry of Science And Technology

Fri Jun 21 , 2019
Noida: AAFT University of Media And Arts is probably the biggest network of media professions in the country. More than hundred thousand film, television, print, radio and new media professionals are associated with different activities of the University. This time AAFT has joined hands with 9th National Science Film Festival […] 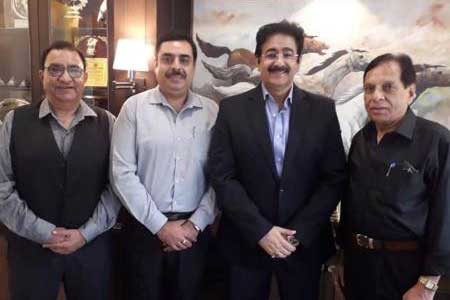