In the category of unmatchable MP, Delhi’s MP Dr. Udit Raj has topped, while BJP MP from Maharashtra Kirk Premji Bhai Solanki has aced in the category of influential MPs. In the excellent MP category, Congress veteran Mallikarjun Kharge has been selected and for the most energetic MP, Maharashtra MP Supriya Sule has grabbed the top position, while Kerala MP NK Premchandran is in the most influential MP category.

Ganesh Singh, MP three times from Satna Madhya Pradesh has made his mark in the category of most popular MP while Bhadohi MP Virendra Singh Mast managed to make a prominent place in the caretaker category. In the Warriors category Maharashtra MP from Ahmednagar, Dilip Gandhi, in a dynamic category, Prahlad Patel from Madhya Pradesh, BJP MP from Mumbai, Gopal Shetty, for the MP with immense capacity and  Congress MP from Assam Sushmita Dev for the most talented MP topped the list.

Position of the Most talked about MP has been secured by Haryana’s youth MP Deepender Singh Hooda. Rajasthan MP Chandra Prakash Joshi is in the category of Kamrath MPs while Prem Das Rai, MP from Sikkim has topped the model category. In the category of responsible MP, Chhattisgarh MP Tamrampuj Sahu got first place. The power category has been aced by Santosh Ahlawat, in the successful category, Bihar MP Ranjit Ranjan received the highest number of votes, in the conscious category, Gujarat’s Member of Parliament, Punmaben Madam, topped the list. Maharashtra’s farmer leader and MP Raju Shetty top the personality area, in the magnificent category Odisha MP Ravindra Kumar Jena gets the highest score.

Suresh Prabhu congratulated the parliamentarians and motivated them to continue         with their hard work for the welfare of the people of this country. Manoj Sinha encouraged the   audience to unite and come forward to support government in fulfilling the objectives prepared for the   country. Giriraj Singh thanked   every one for their presence to keep on supporting their MPs to work within the legal and time frame.

Sandeep Marwah announced that we will come back again in Vigyan Bhawan next year with new list of MPs as awardees. The event was attended by large number of MLA,s MPs, workers of different political parties and who’s who of National political scene.

Fri Apr 5 , 2019
Faridabad: The members and promoter of Sharad   Foundation Dr. Hemlata Sharma honored Dr. Sandeep Marwah President of Marwah Studios for his untiring contribution to the social causes in India. “It is pleased to know that Sandeep Marwah is not only an educator but he is a real philanthropist. His contribution […] 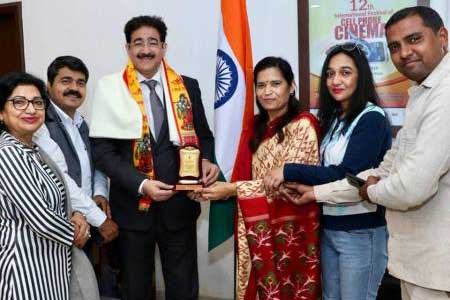