Noida â€œAll the 54 countries of Africa appreciate the move of bringing Love Peace And Unity through Journalism, a unique idea of conducting festival of this kind, indeed Sandeep Marwah is the Global Cultural Ministerâ€ said H.E.Koumba Desire High Commissioner of Gabon to India and Dean of African Nations while inaugurating the 4th Global Festival of Journalism Noida 2016 here at Noida Film City on International Journalism Day.

Journalist from all over India and more than 30 countries of the World participating from Asia, Africa, and Pacific countries converted the festival to the most exclusive event. Workshops, seminars, interactions, master classes, exhibitions, talks, symposiums on national and international issues brought all the nations together on many concerns.

â€œWhat a pleasure to see national of 30 countries appreciating India and its culture. Journalism can play a very important role in bring the people of the World close to each otherâ€ said Sandeep Marwah President Marwah Studio.

Delegates from all over India and from more than 30 countries of the World marked their presence. People from print, radio, television, cinema and new media were there in large scale. The event was divided into three major inaugurations owning to accommodate the large number of participants.

H.E. Koumba Desire High Commissioner of Gabon inaugurated the paining exhibition of renowned artist Gobind Sirsat from Mumbai and later released the poster of Mahatma Gandhi Forum to pay respect to the Father of the nation.

Tue Feb 23 , 2016
Noida: â€œParticipation of so many countries on 12th February â€“ International Day of Journalism and 13th World Radio Day proves that Love Peace and Unity is still the priority of the World. Here I have learned more than my expectations.â€ said H.E. Dr. Mbuya Isaac Munlo High Commissioner of Malawi […] 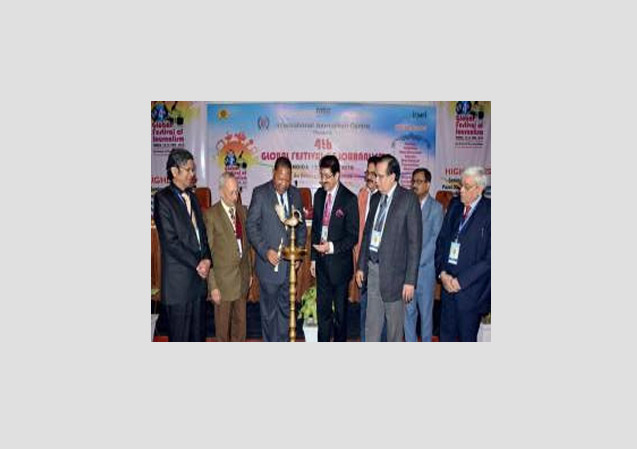