Noida: The International Womenâ€™s Film Forum has expanded its wing today towards Israel. The most dynamic woman Netta Ness who has recently been honored as Iconic Woman of the Decade has joined the board of IWFF.
An entrepreneur, speaker, and seasoned executive, Netta Ness is the creator of the Chance Management Process. Netta is known for her ability to distill the emotional to the intellectual â€“ integrating trends, patterns and overall potential into innovative strategies.
Netta is the former VP of a hedge firm where she managed the portfolios of clients, stakeholders, and strategic partners. Previously, she headed international business development and strategic communications in diverse industries including Omni Guide Surgical, a technology company based in Cambridge, MA. Additionally, she was responsible for community relations in a number of NGOâ€™s and associate director for APCO World Wide, a strategic consulting firm.
Later Sandeep Marwah President Marwah Studios honored Netta Ness with the life membership of International Womenâ€™s Film Forum and International Film And Television Club of Asian Academy of Film And Television. She had a wonderful interaction with the members of International Chamber of Media And Entertainment Industry

Thu May 26 , 2016
Noida: The zest and the enthusiasm of Marina impressed the large audiences present at the ICMEI- International Chamber of Media And Entertainment Industry meet at Marwah Studios. Sandeep Marwah honored Marina with the life membership of International Womenâ€™s Film Forum. Marina is a former Spokeswoman at the Knesset (the Israeli […] 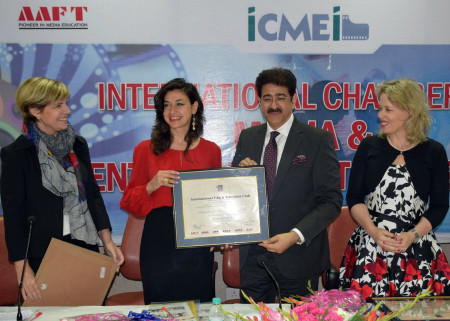