New Delhi; The editorial board of the popular magazine Fame India has decided to publish a complete magazine on Sandeep Marwah founder of film city Noida.

“We have decided to publish a complete magazine on Sandeep Marwah a living legend who has surpassed all the limits of promotion of art and culture worldwide,” said U.S. Sonthalia the managing director of the group.

“We have been studying Sandeep Marwah from last four years. A lot has to be written on him, his vision and his way of working must be utilized by our own government,” added Sonthalia.

“I am a humble servant of my mother land and I am putting my best to bring in love peace and unity to this country and World through art and culture,” Sandeep Marwah thanked the Fame India Group for interviewing him for the magazine.

A well designed cover of the magazine was handed over to Marwah by the team at his studios as the beginning of the project.

Fri Dec 22 , 2017
New Delhi: “Indian traditions have great values, they are the keys to peaceful and comfortable life of Human being. Trust them and you will always be a winner,” said Sandeep Marwah President of Marwah Studios at a grand function organized by Lets Give Back an association promoted by Babeetta Sakxena […] 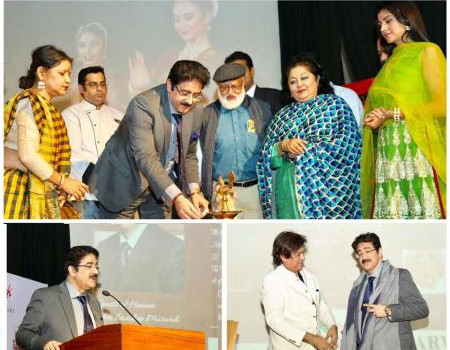