“We have been celebrating this big day from years together as the day gives us new strength to unite the country into one,” said Dr. Sandeep Marwah President of Marwah Studios while releasing the poster of National Unity Day.

“We have a special program on Radio Noida and MSTV on Sardar Patel. We want largest number of people must understand the ideology of “The Iron Man’” added Dr. Marwah.

Marwah Studios has a special counter on Sardar Patel in the books and video library. Few short films have been produced by Sandeep Marwah on Sardar with the help of film and television students of Asian Academy of Film And Television.

The event was supported by ICMEI- International Chamber of Media And Entertainment Industry and International Film And Television Research Centre.

Convocation of 104th Batch of AAFT at Marwah Studios

Wed Nov 6 , 2019
Noida: Asian Academy of Film And Television bid farewell to the trainees of 104th batch at Marwah Studios, Noida Film City with great pomp and show. “Enough has been taught to you, an education of almost 400 hours to three months students and 1500 hours of education to One year students […] 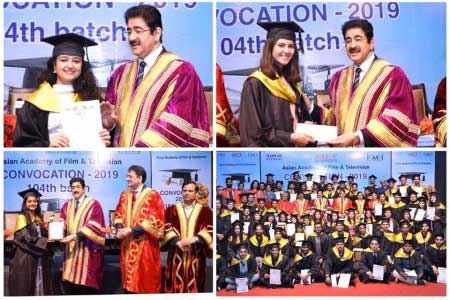