New Delhi: â€œMarwah Studios is not only an institution but a very strong global representative of India and its culture. The only of its kind which has spread its wings in more than 150 countries of the World through films, television, media, art and culture,â€ citation was read by Devender Kumar convener of National Gaurav Awards at Vigyan Bhawan.

The award was handed over by the Union Minister for Minorities and Senior BJP Vice President Mukhtar Abbas Naqvi at Vigyan Bhawan in the presence of very enthusiastic and charged audience.

Marwah Studios has been founded and promoted by World-renowned media person Sandeep Marwah in 1991 at Noida film city. He is five times World Record Holder and recipient of more than 450 awards from all over the World.

The Gandhian policy of Sandeep Marwah has given him many different status including Global Cultural Minister, Global Peace Ambassador, Man of Asia, Icon of The Decade, Global Cultural Ambassador etc. He has been titled junior Sardar Vallabh Bhai Patel for uniting India and rest of the World through art and culture.

Wed Mar 15 , 2017
New Delhi: Indo Maldives Film And Cultural forum has been created with great pomp and show on the second day of 5th Global Festival of Journalism Noida in the presence of large audience from all over the World. Sandeep Marwah was nominated as the Chairperson of the forum by H.E. […] 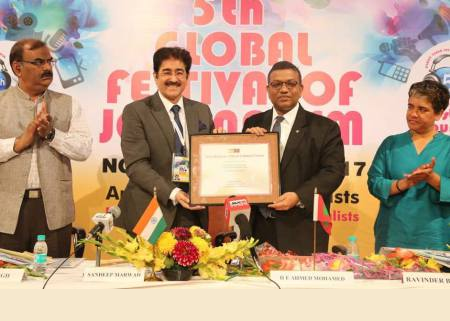