Noida: International Chamber of Media And Entertainment Industry Celebrated the National Day of Switzerland at Marwah Studios With the members of the organization.

“We extend our heartiest congratulations to the people of Switzerland on their National Day and wish them a lot of love, peace and unity. We pray for the strongest relations with India for all time to come,” said Sandeep Marwah President of Marwah Studios and ICMEI.

A congratulatory message was sent to H.E. Andreas Baum Ambassador of Switzerland to India as a gesture of goodwill by ICMEI.

The first diplomatic engagement between the countries was a Treaty of Friendship signed at New Delhi on 14 August 1948. Diplomatic missions between the two countries were opened in Bern and Delhi soon after its conclusion. Switzerland established its Consulates General in Mumbai and Bengaluru. India has a Consulate General in Geneva.

Tue Sep 4 , 2018
New Delhi: A National conference on Environment And Sustainable Living was organized by AKP Healing India in association with ICMEI- International Chamber of Media And Entertainment Industry at Hotel Le Meridien to create awareness about the need of a better environment. “Sandeep Marwah has been involved with large number of […] 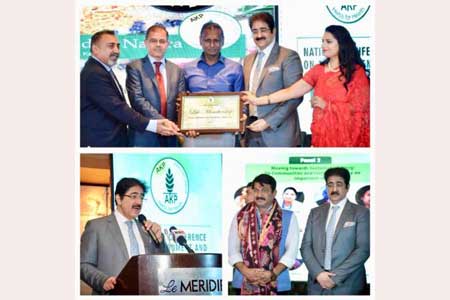