New Delhi: To mark the National Day of Russia, “Congratulation to Russia” an international webinar, a first-of-its-kind initiative to strengthen the bonds of friendship, stood as a testimony to the fact that true friendships, founded on love, trust and faith, continue to grow, even over the longest distances.

Webinar jointly organized by BRICS International Forum and International Federation of Indo Russian Youth Clubs with the support of Embassy of Russian Federation in India, Russian Centre of Science & Culture, Asian Academy of Film & Television and Amicable Diplomatic Club. Digital sessions were attended and conducted with the support of the public organisations. Eminent speakers and experts shared their thoughts and feelings for Russia by connecting digitally to congratulate Russia on the eve of Russian National Day on June 11th, 2020 at Zoom invitation.
This sojourn took place on a digital platform and was, primarily, divided into two sessions. Beautifully stringing the different historic events that took place and shaped the diplomatic relations, Sandeep Marwah, President, Asian Academy of Film & Television (AAFT) chaired the first session and establishing the dynamics of the conversation, passed on the baton to Sergey Fandev, Director, RCSC Mumbai and former Ambassador Ashok Sajjanhar, President, Institute of Global Studies, followed by Dr. Vijay Jolly, Senior BJP Leader.

Mikhail Ktitorov, First Secretary, conveyed the message of H.E. Mr. Nikolay Kudashev, Ambassador of the Russian Federation to India, stating that event is an inspiring initiative that people to people contact and mutual affinity are the key drivers of friendship and solidarity.

Enlightened by their words of wisdom, the session continued with the message from Natalia Poklonskaya, Deputy of the State Duma of Russia, Ramdas Athawale, Minister of State for Social Justice & Empowerment, Government of India and with the presence of Tatyana Lebedeva, Russian Athlete and Former Senior Senator at the Russian Parliament and Aleksey Davidovsky, Analysist and Vice President, BRICS-IF. The first session concluded with the beautiful words of Purnima Anand, followed by the wishes conveyed to Russia by the youth leaders

Apart from these eminent speakers, friends from across the globe like Sophia from Russia, Dregana Trifkovic from Serbia, Nelson Seleviraj from Malaysia, Volkar Tapchev from Germany, Abdul Basit and Swami Prem Prayojan from United States, Tebeoh from South Africa, Fauad Al-Ghaffari from Yaman, Henrick from Brazil, Yeween from China, Deepayan, Aakash and Ojuswi from India also conveyed their warm greetings and wishes to Russia and the Russian friends round the globe. The session concluded by the vote of thanks, jointly delivered by Sergey Fandev, Dvoryanov Sergey and Purnima Anand. Also Remarks and feelings shared by the speakers and experts.

Thu Jun 25 , 2020
New Delhi; News Paper Association of India in association with International Chamber of Media And Entertainment Industry organized a webinar on the future Prospects of Print Media. “We could see that slowly and gradually the print media has been converted into digital media. The best of the news papers are […] 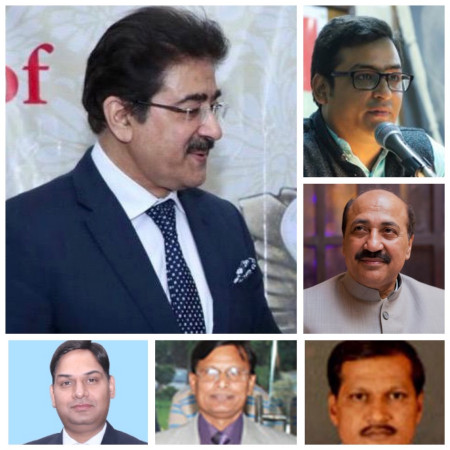