New Delhi; International Chamber of Media And Entertainment Industry extends its heartiest congratulations to the country of Egypt on its National Day falls on 23rd July.

“I on behalf of Indian Media and Entertainment Industry take this pleasure to congratulate the people of Egypt on their National Day. Mat our friendship grow every day,” said Sandeep Marwah President of ICMEI.

“We have wonderful relations with Egypt. I had the honor to be the state guest of Government of Egypt during 33rd Cairo International Film Festival. I had the pleasure to be the Chair of Indo Egypt Cultural Forum created by the Ambassador of Egypt to India,” added Marwah while releasing the poster of National Day.

Modern Egypt–India relations go back to the contacts between Saad Zaghloul and Mahatma Gandhi on the common goals of their respective movements of independence. In 1955, Egypt under Gamal Abdel Nasser and India under Jawaharlal Nehru became the founders of the Non-Aligned Movement.

Sandeep Marwah Was The Case Study of 10th MFRT Conference

Thu Aug 16 , 2018
New Delhi: More than 800 enthusiastic entrepreneur and managers from all over India gathered to listen to the case study of six times World Record Holder Sandeep Marwah at 10th Convention of MFRT at Hotel Leela at New Delhi. ‘Rome was not built in a day’, ‘Life is not bed of […] 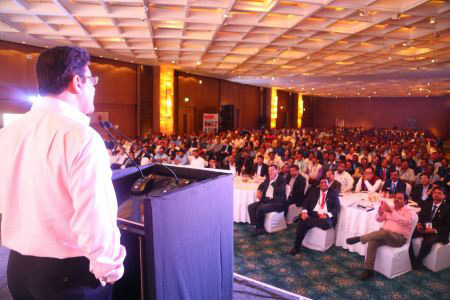