â€œInternational Journalism Centre created by Sandeep Marwah has brought many national and international organizations at the same platform. He is also the editor of a newspaper, a radio station, a television station and a news agency. His devotion and untiring efforts in improving the conditions and level of journalism in India and abroad are worth recognizing,â€ added Vipin Gaur.

Sandeep Marwah has been awarded NAI Award for Most Popular International Journalist in the presence of journalists from all over India and abroad. The State Minister for Electronics and Information Technology & law and justice Shri P.P. Choudhary and State Minister for Finance and Corporate Affairs Shri Arjun Ram Meghwal were also present there.

Tue Dec 27 , 2016
Noida: Another feather in the cap of International Chamber of Media And Entertainment Industry when Indo Serbian Cultural Forum was launched by H.E. Vladimir Maric Ambassador of Serbia to India at Marwah Studios. â€œThis is the first of its kind organization in the country of Republic of India. I am […] 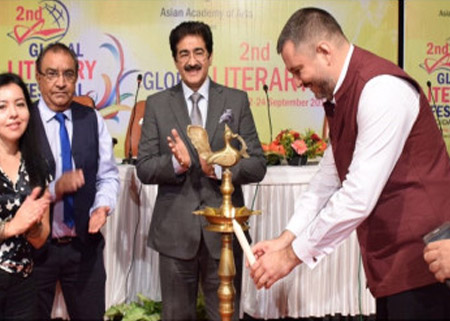