Noida, 7th October 2014 ;Popularly known as a singing policeman in Leicester, UK, Kulbinder Rai is in Noida for the release of his music album at Marwah Studios. He has always believed that music is the universal language of peace.

Kulbinder Rai has been working for the Police since 1994 and just after two years of his service, he was bestowed with an Outstanding Achievement Award by the Home Office. Witnessing violence and injustice on an everyday basis through his job, his earlier album in Punjabi song â€˜Rohbâ€™ sends out a message to people to â€˜Be Good and Do Goodâ€™.

â€œPeople who have no love for music are not normal. Music can be in any form. Music makes you feel close to Godâ€ added Sandeep Marwah President of Marwah Studios while releasing â€œKABHIE NAZARâ€ the music CD of engineer Kulbinder Rai.

Present at the occasion was renowned Nigerian dress designer, John Jesus. He appreciated the gesture of releasing the music in India. 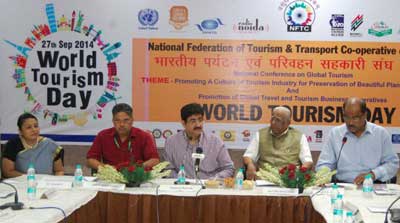