Rome: The Chairperson of World Peace Development And Research Foundation Sandeep Marwah from India was one of the attendees at the historical event of Canonization of Mother Teresa, where the Pope has declared her as the Saint.

â€œThousands of people were gathered there to see this great event. It was an emotional moment when Mother Teresa of Kolkata was announced. You feel so charged that India is the real spiritual country,â€ said Sandeep Marwah.

Mother Teresa, a Catholic nun who devoted her life to helping Indiaâ€™s poor, has been declared a saint in a canonization Mass held by Pope Francis in the Vatican.

Pope Francis delivered the formula for the canonization of the Albanian-born nun â€” known as the â€œsaint of the guttersâ€ â€” before huge crowds of pilgrims gathered in St. Peterâ€™s Square in Vatican City on Sunday morning.

Applause broke out before he completed the formula of canonization, in which he declared â€œBlessed Teresa of Calcutta to be a saint.â€

Thu Sep 22 , 2016
Rome: Renowned international media personality and President of Asian Education Group Sandeep Marwah was invited at the most popular musical opera at Rome. The Asian School of Performing Arts- a school of Music invited the roman musical group to India to perform an oldest art of singing â€“Opera. â€œIf you […] 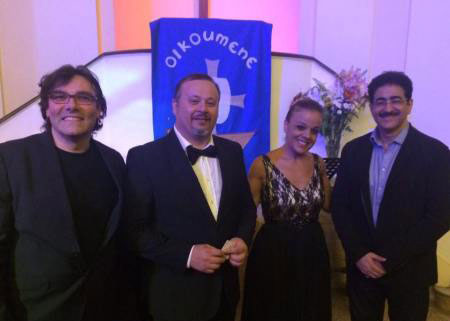