Noida: The Education Minister of the State of Chhattisgarh Shri Prem Prakash Pandey was the special guest at Marwah Studios, film city Noida on the invitation of Sandeep Marwah President of Asian Education Group.

A tour to film city and Marwah Studios was organized to give first hand information to the Minister about the activities of the centre in the field of films, television and media.

Sandeep Marwah briefed the minister with the five World Records he has created in this industry and presented him his two books mentioning the 100 organizations he has been chairing. Marwah also briefed him about the 100 international awards he has brought to India, which is largest number of appreciation any Indian has brought so far.

Honorable Minister had one to one conversation with the students of different discipline to assess the quality of education being provided at Asian Academy of Film And Television. AAFT is the oldest skill development institution in India.

Later Sandeep Marwah honored the Cabinet Minister of the State Shri Prem Parkash Pandey with the life membership of International Film And Television Research Centre of AAFT. Prem Prakash Pandey is a Bharatiya Janata Party Member of the Legislative Assembly from Bhilai Nagar in Chhattisgarh. He is one of the architects of Chhattisgarh, which was formed in 2000 after the bifurcation of Madhya Pradesh. He is currently serving as the Cabinet Minister in Chhattisgarh State Government.

Tue Apr 24 , 2018
New Delhi: Another feather in the cap of Sandeep Marwah when the management of Vajra records registered the World Record created by Sandeep Marwah in film production of Short Films in their books of World record. “Sandeep Marwah is the only producer in the World who has produced till now […] 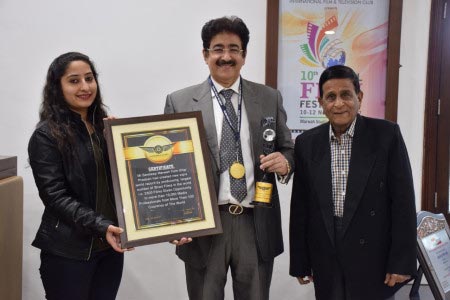