New York: â€œNew York is the most populous city in the United States and the center of the New York metropolitan area, the premier gateway for legal immigration to the United States and one of the most populous urban agglomerations in the world. A global power cityâ€ informed Sandeep Marwah Managing Director of National Federation of Tourism And Transport Cooperatives of India Limited during his visit to New York.

New York exerts a significant impact upon commerce, finance, media, art, fashion, research, technology, education, and entertainment. Home to the headquarters of the United Nations, New York is an important center for international diplomacy and has been described as the cultural and financial capital of the world

New York is the most densely populated major city in the United States. As many as 800 languages are spoken in New York,, making it the most linguistically diverse city in the world.

Many districts and landmarks in New York City have become well known, and the city received a record 56 million tourists in 2014, hosting three of the worldâ€™s ten most visited tourist attractions in 2013. Several sources have ranked New York the most photographed city in the world said Sandeep Marwah.

We need through planning and designing in converting New Delhi and National Capital Region into an International Hub like New York Marwah added while talking to the press at Hotel Trump, Soho.

Sat Jan 9 , 2016
New York: â€œI am happy to be invited here at Indian Consulate General at New York. It gives me pride in expressing my achievement to the Ambassador H.E. Dnyaneshwar Mulay and let him know that I am carrying the success back homeâ€ said Sandeep Marwah President of Marwah Studio and […] 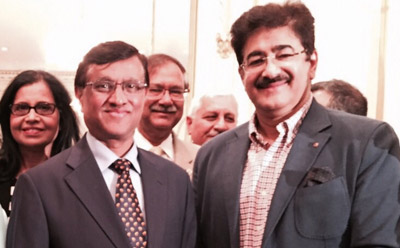