â€œA proper education and training can always put you on better platform. It can give you good start and progress is sureâ€ said Vivek Agnihotri renowned film director expressing to the young film makers on the first day of 7th Global Film Festival Noida at Marwah Studios.

â€œDirection needs lots of concentration on your project. Writing skills is a bonus to the directorâ€ added Agnihotri in a master class who has brought his unreleased film â€˜Buddha In A Traffic Jamâ€™ as the opening film of the festival.

Vivek Agnihotri is an avant-garde Bollywood Indian film director, producer and screenwriter. Agnihotri is one of the few new age Hindi cinema film directors, known to experiment in different genres of film making. He has ventured into genres like erotica, thriller, sports, political dramas and love stories making him a multi genre director.

Agnihotri is famous for his feature films like Chocolate, Dhan Dhana Dhan Goal, and Hate Stories. He has been associated with more than 1500 advertisement films so far. Festival Director Ashok Tyagi conducted the class accompanied by Pallavi Joshi.

Tue Jan 5 , 2016
More than 3000 people were astonished to see the grand opening of first day of 7th Global Film Festival Noida 2014 on 11th of November in the campus of Marwah Studios at Noida Film City. A non stop entertainment program was organized by the students of Asian Education Group comprising […] 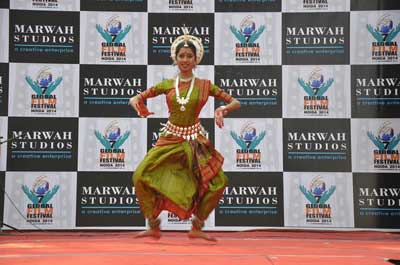