Tashkent: The two popular film associations Marwah Studios of India and Kayumov Film of Uzbekistan joined hands to produce and present short films and feature films together in the near future.

The MOU was signed between the two production companies on the visit of Sandeep Marwah to Tashkent where he was leading a delegation of 18 media persons to Tashkent.

“We have found the counter part in Uzbekistan. A well-equipped organization with past experience can be the most helpful to you in planning and designing production in a new country. We hope that soon we will be able to start a film in Uzbekistan,” said Sandeep Marwah President ICMEI.

“It was a pleasure to visit Marwah Studios in my last trip to India. Now his visit to Tashkent has completed the circle. The goodwill of the studios is enough to join hands with them as India’s representatives,” said Saen Keen Director of Kyumov Film.

Mon Jun 11 , 2018
Tashkent: A grand event was organized by IJC- International Journalism Centre in association with NAI- News Papers Association of India supported by ICMEI-International Chamber of Media And Entertainment Industry to honor some of the professionals who all have done extremely well in their professions. “This is for the first time […] 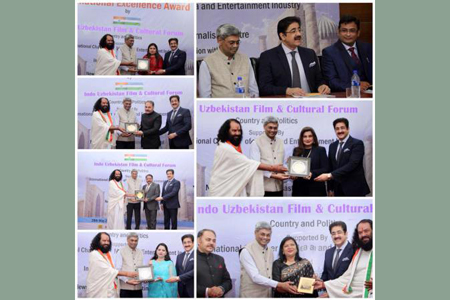