Large numbers of events have been planned during the year to project the different departments and segments of Marwah Studios including Print, Radio, Television, Cinema, New Media, Education and social activities informed Sandeep Marwah the founder President and media baron of India.

â€œWhat a wonderful day to visit this holy place of cinema- when Marwah Studios is in the deep colors of celebration its 26th anniversary along with the most popular festival of Holi and the team of feature film Machine,â€™ said Abbas Burmawala renowned film producer of Abbas Mastan fame addressing the large number of media students at Noida Film City.

â€œWe have stepped into this campus for the first time but the energy of cinema is familiar to Mumbai. The feature film Machine has a perfect beginning,â€ added Mastan Burmawala film producer known for his films Baazigar, Khiladi, Baadshah, Soldier, Chori Chori Chupke Chupke, Humraaz etc.

â€œWhat a pleasure to be back again here at Marwah Studios on the D Day. My heartiest congratulations to everyone here on 10th March.. I had the opportunity to come for my promotion for feature film Fugly with Mohit Marwah and now for film Machine,â€™ said Kiara Advani the lead of film Fugly and M.S.Dhoni The Untold Story.

â€œI am so thankful to Sandeep Marwah for hosting us. Associating with Marwah Studios has enhanced our confidence,â€ said Mustafa the lead hero of feature film Machine.

Marwah Studios has become an international destination for films and television. The reach of the studios has crossed all the boundaries of Asia and Asia Pacific. Itâ€™s a family of 15000 media professionals scattered in 154 countries of the World. Marwah studios has been associated with more than 300 national and international organizations in all the sectors of society.

A poster of 93rd Edition of AAFT Festival of Short Digital Films was released on the occasion. Sandeep Marwah presented life membership of International Film And Television Club of Marwah Studios to all the dignities.

Wed Mar 15 , 2017
New Delhi; The known film producers and directors Abbas Mustan opted Marwah Studios and Asian Academy of Film And Television as a platform for the promotion of their forth coming feature film Machine at Noida Film City. The lady in lead role Kiara Advani who is known for her role […] 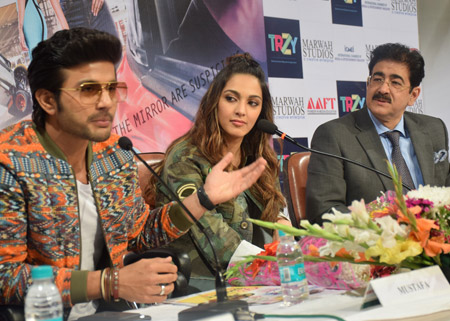