Noida: The zest and the enthusiasm of Marina impressed the large audiences present at the ICMEI- International Chamber of Media And Entertainment Industry meet at Marwah Studios. Sandeep Marwah honored Marina with the life membership of International Womenâ€™s Film Forum.

Marina is a former Spokeswoman at the Knesset (the Israeli Parliament) and worked several years in Spain and in the US, as a Public Affairs Specialist on behalf of the government. She is an expert in public diplomacy, public policy and public speaking and she is also the founder of the first Toastmasters Club for public speaking practice in Tel Aviv.

She is an international well-known speaker for communications in management and politics. With a spark in her eyes, her passion is contagious and she has a special talent to empower, motivate and inspire people at her lectures.

Nowadays, she teaches courses and workshops at government institutions, High-Tech companies and Startups, for organizational excellence in management and communications.

Thu May 26 , 2016
New Delhi: The international art promoter and media guru Sandeep Marwah inaugurated a group show by prominent artists under the titled Myriad Hues at the most prestigious art gallery Shrdhanjali at Treveni Kala Sangam. â€œWhat a pleasure to see the vast variety of art and projection of different cultures through […] 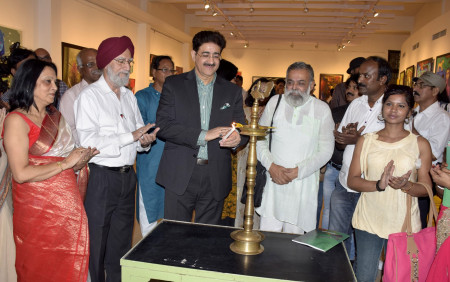