Manoj Bajpai is a versatile actor, like other films he is again quite different this â€œtime in feature film Tever. The performance of Manoj Bajpai leaves a very good impact of his performing art,â€ said Sandeep Marwah President of Marwah Studios.

â€œI have given my best. The role was so powerful that I enjoyed my every bit of it,â€ said Manoj Bajpai during his visit to Delhi.

Manoj Bajpai has been known for his roles as dacoit Maan Singh in Bandit Queen, Raghavan in Aks, Bhiku Mahatre in Satya, Rasheed in Pinjar and Sardar Khan in Gangs of Wasseypur His work has been recognized by several Filmfare awards as well as multiple National Film Awards

Wed Jan 6 , 2016
I am a Delhi boy, I always wanted to come back to Delhi with some kind of achievement. Tever is my first film as a Director. I am sure people of Delhi will like the filmâ€ said Amit Sharma Director of film Tever at New Delhi on the invitation of […] 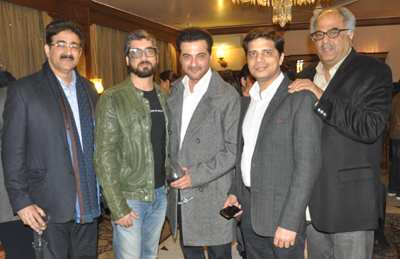