Bangkok: â€œ The contribution of Sandeep Marwah of Republic of India to the World media and entertainment industry is unbelievable. He is an institution in himself. The boards of directors of Paul Academy are honored in presenting this award to such a towering international personality. His aura is not less than any international leader of the World,â€ said Paul Narula renowned educationist and multifaceted businessman from Thailand.

Sandeep Marwah is a distinguished International media personality and five times World Record Holder. Sandeep Marwah once again honored at Bangkok on his visit to Thailand for his untiring contribution to the Media and Entertainment Industry.

Marwah is the recipient of more than 400 awards from all over India and only Indian to be appreciated and honored by more than 60 times by 40 countries of the World.

The biggest contribution of Marwah is the first ever formation of International Chamber of Media And Entertainment Industry in the World. Being the founder of the chamber he has brought the whole world close to each other through art and culture.

He has been teacher and trainer to more than 12000 media professionals from 120 countries of the World. The most well travelled, most invited by foreign media organizations Sandeep Marwah has represented Indian media and entertainment industry maximum times.

The MAN OF ASIA, an international award for media and entertainment industry handed over to Marwah by Paul Narula Director Paul Narula Academy at Omni Towers at Bangkok on the official visit to Thailand.

â€œI am so thankful to Thailand for opting me for this most prestigious award. I will do my best to keep up to the award,â€ said Marwah in a very humble tone.

Sat Jul 23 , 2016
Noida: â€œAsian Academy of Film And Television has seen a new growth under the leadership of Sandeep Marwah who has been honored as Man of Asia only two days back. His vision, his efforts and his achievements are the real source of inspiration for young media personsâ€ said Dr. Vijay […] 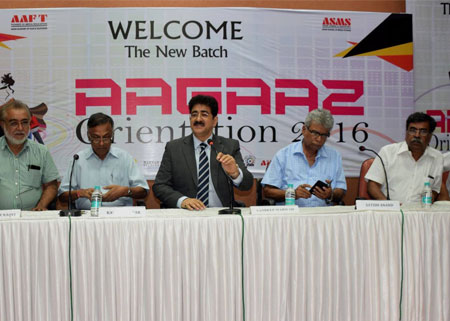