Noida: A powerful, prestigious and a valuable National Award after the name of Father of The Nation Mahatma Gandhi was constituted by the Asian Education Group in association with International Journalism Centre and International Chamber of Media And Entertainment Industry.

“Never before any award has been constituted for Journalism after the name of Mahatma Gandhi. The idea behind this award is to felicitate all those people who have spend years in the field of journalism and their work is worth quoting for the research and education, ”said Dr. Sandeep Marwah President of the award committee.

Apart from being a national leader and social reformer, Gandhi was a great communicator. More than any one else, he recognized that communication is the most effective tool to shape opinion and mobilize popular support

Gandhi, in a journalistic career spanning nearly four decades, edited six journals. In 1933 Gandhi started Harijan, Harijanbandhu, Harijansevak in English, Gujarati and Hindi, respectively. These newspapers were the vehicles of his crusade against untouchability and poverty in rural areas. These papers published no advertisements even then they enjoyed wide circulation.

Tue Feb 19 , 2019
Noida: A dance recital by well-known odissi dancer Sharon Lowen was presented where she not only performed three different set of dances but also explained them in detail. It was a learning exercise for many media persons attending the same. “It was a great decision to have an international star […] 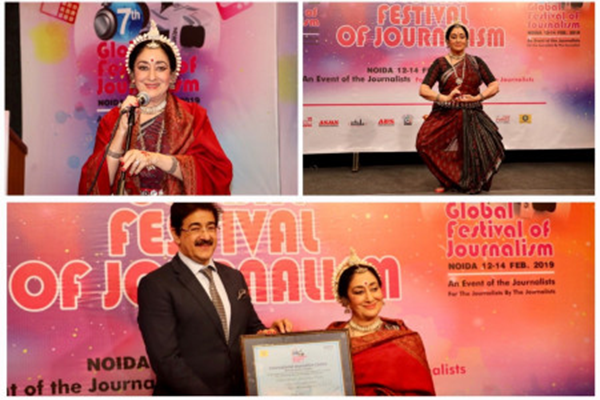