New Delhi; The Media And Entertainment Industry in India is emerging as one of the biggest industry as it will touch a turnover of 180,000 crores at the end of next year. Government and private players have ample to look after many important issues of this industry,â€ said Sandeep Marwah President of Marwah Studios and International Chamber of Media And Entertainment Industry.

Sandeep Marwah was talking at a grand function designed by Bollywood Crime Reporter and Time Music Industry at Muktadhra auditorium at New Delhi on the occasion of BCR Excellence Awards 2017.

â€œWe are privileged to have Sandeep Marwah as our chief guest today who has brought the awareness of Indian media and cinema to World level. His contribution towards arts and culture will get into the books of history,â€ said Ajay Shastri the convener of the awards while handing over the award to Marwah.

Later Marwah presented awards to the prominent people from Media industry and also to social workers. â€œI am honored to be here for presenting awards to all those who have brought the industry to new level through their contribution. Every little gesture matter in this industry,â€ said Marwah thanking for his award too.

Mon Oct 9 , 2017
New Delhi: â€œWe are the leaders of Yoga in the World. 21stÂ June is been given to the World as International Yoga Day. It feels great when any foreign country adds color to yoga. I am impressed by the High Commission of Democratic Socialist Republic of Sri Lanka in New Delhi […] 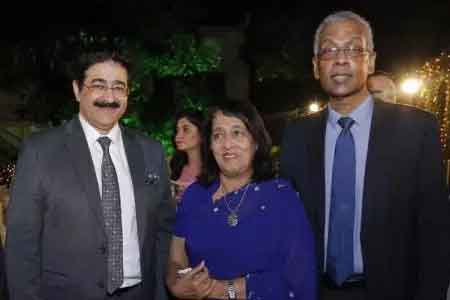