London: London is one of the world’s leading tourism destinations, and the city is home to an array of famous tourist attractions. The city attracted 20.42 million international visitors in 2018, making it one of the world’s most visited in terms of international visits informed Dr. Sandeep Marwah Managing Director of National Federation of Tourism And Transport Cooperatives of India Limited talking to Indian press at Hotel Montcalm at Marble Arch.

It welcomed an additional 27.8 million overnighting domestic tourists in 2017 and had 280 million day- trippers in 2015. Overall London sees in nearly 50 million overnighters each year, and over 300 million visitors if including day-trippers.

The tourism sector employed 700,000 people in 2013 according to Deloitte – Oxford Economics, accounting for 11.6 percent of the capital’s GDP.

“There is so much to do in London that tourist is bound to come here again and again. We at India must change our attitude towards tourism and start giving our best to the nation. Every one in the country must respect the tourist to bring change in the system,” added Sandeep Marwah also President of Asian Institute of Hospitality and Tourism.Marwah studios has attracted 1.4 million people to Noida Film City under Film Tourism.

Tue Oct 1 , 2019
London: The Chief Scout For India Sandeep Marwah was the special invitee at Indian High Commission to be the part of 150th Birth Anniversary Celebration of Mahatma Gandhi. “The name of Mahatma Gandhi is known to roadside worker to Managing Director of a multi national company and can be seen from […] 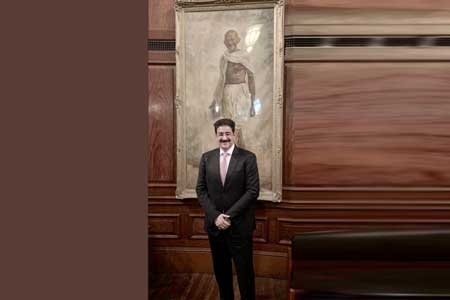