Noida: â€œFirst ever-literary Festival of NCR has won the hearts of people. It should be a regular feature now. We all will put our best to promote it and try to reach to the maximum people in the coming yearsâ€ said Ram Shankar Katheria State Minister, Ministry of Human Resources Development, and Government of India on his visit on the second day of the festival.

â€œThe literature written spoken and heard develops the culture and traditions of any country. Good literature will lead to better thinking process for the young and coming generation,â€ added Ram Shankar HRD Minister of India.

â€œWe are the results of Ramayan, Mahabharta, Geeta, Kuran, Bibble and Guru Granth Sahib. More sophisticated literature is needed today to built up better and strong society in the country tomorrow. Sandeep Marwah has created a history by starting a literary festival and bringing good literature to the tableâ€ said Inderesh Kumar Singh of Rastriya Sewa Sangh.

â€œWe will leave no stone unturned in bringing cautiousness in the society to bring better literature for the young generation so that it should lead to better human beings and civilized citizens of Indiaâ€ said Sandeep Marwah President of First Global Literary Festival Noida 2015.

Later Minister released the book-VIDESH NITI by Pankaj K Singh. The event was attended by the large number of literature lovers from all over India and also the students of Asian Academy of Film And Television, Asian School of Media Studies and Asian Business School. Sushil Bharti paid vote of thanks.

Wed Jan 13 , 2016
Noida: What an excellent occasion to launch Indo Bulgarian Film And Cultural Forum when we are inaugurating the painting exhibition of renowned artist from Bulgaria at Marwah Studioâ€ expressed H.E. Petko Doykov Ambassador of Bulgaria to India. â€œInternational Chamber of Media And Entertainment Industry is feeling proud to create another […] 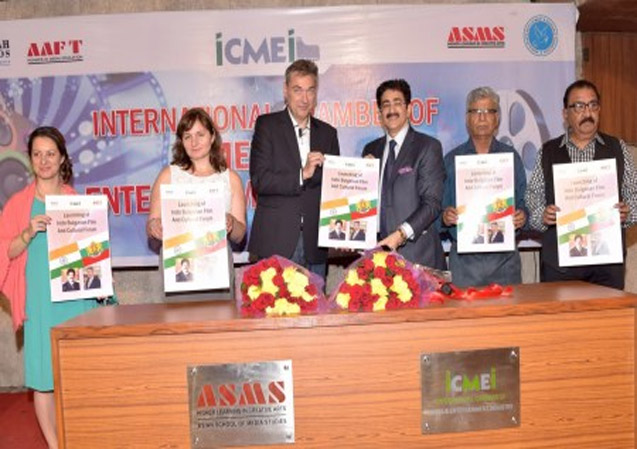