New Delhi: Some of the prominent women were honored by the organization called Lets Give Back who all has contributed to the society through their untiring efforts in different fields at India Islamic Cultural Centre at New Delhi.

â€œWomen play a very important role in manâ€™s life whether she is a mother, sister, wife or daughter. Respect for women is must. No society can prosper unless women is respected and given an important status and position,â€ said Sandeep Marwah President Marwah Studio & Global Cultural Minister while inaugurating the function.

The awards were handed over to Indiaâ€™s veteran danseuse, an accomplished Kathak, Kathakali and Bharatanatyam dancer Tara Balgopal. Presidents and Prime Ministers of India have already honored her many times. A postage stamp was dedicated to her in 1962. It was released after she performed in the Parliament in 1960.

â€œIt is a great pleasure to honor those women who all have brought new light to the society through their sincere efforts and sacrifices. I salute them,â€ said Babeetta Sakxena President of the organization Lets Give Back. Marwah Studio and ICMEI- International Chamber of Media And Entertainment Industry supported the event.

There Is No Alternate to Hard Work- Sandeep Marwah

Mon Mar 7 , 2016
Noida: â€œOnly those people can rise in life who are honest to their profession, There is no alternate to hard workâ€ said Sandeep Marwah President Marwah Studio & Global Cultural Minister to the large young audience gathered for Prime Ministerâ€™s Start Up India Program at Noida Film City. â€œDevelop the […] 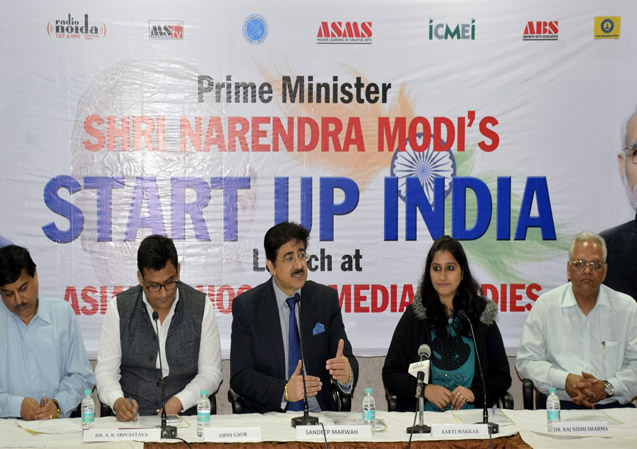