Noida: All the activities at Marwah Studios associated with disabilities, special children and any other section of society which needs these kinds of supports shall be roped in this organization called KOSHISH-SAHYOG informed Dr. Sandeep Marwah President Marwah Studios who has been involved with society welfare from a long time.

Sandeep Marwah has been involved with making of special cinema where films are made on some achievers who have done extra ordinary well even though they have been discarded by the society because of disability. He has been conducting a film festival of films on disability now for more than twenty-five years. Special screenings are done with every batch of AAFT to sensitize the students of the institution.

The most popular international film festival-Global Film Festival Noida has a section every year to showcase films on disability from last thirteen years. Every college of AAFT University is somewhere or other involved with this department to create awareness about the subject.

Radio Noida 107.4Fm under the President ship of Sandeep Marwah broadcast weekly programs on special people and MSTV has also been broadcasting films on disability frequently. Marwah Studios has been conducting workshops, seminars, talks, interactions, exhibitions related to the subject of disability.

United Nations honoured Marwah for his contribution to social upliftment including contribution to Special people. Marwah is also the part of Special Olympics and associated with large such organizations.

Mon Dec 7 , 2020
New Delhi: Over the last months, as the COVID-19 pandemic has ravaged across the world, volunteers have been at the forefront of medical, community and societal responses. Headlines in the world’s media have paid credit to volunteers for all kinds of work, from helping to provide medical care, to doing […] 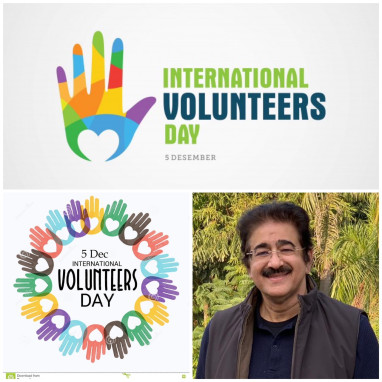