Noida: Entertainment is the essential part of any festival any where in the World. The performances of music and dance depict your culture and helps in learning more about the arts and culture of the place.

â€œWith almost thirty countries participating in the Global Literary Festival it was necessary to showÂ Â  our heritage and cultural to all these foreign delegates. Vidha Lal won the hearts of the audiences,â€ said Sandeep Marwah President of the Festival.

Vidha Lal, a multi-faceted kathak exponent is a disciple of renowned guru smt. Geetanjali Lal of Jaipur gharana. Vidha has emerged as a rising star in the field of kathak. She is an empanelled artist of Indian council for cultural relations (ICCR) and â€˜Aâ€™ grade artist from Delhi Doordarshan. Vidha has earned great acclaim in the media and from connoisseurs for her brilliant solo performances in India and abroad.

She received â€˜Sri krishana Gana Sabha Endownment Award 2010â€™, Chennai. She made a Guinness world record for most numbers of spins (103) in one minute in 2011. Later Vimla Batham Member of the Legislative Assembly Noida in the capacity of Chief Guest honored Vida Lal with the participation certificate of 2nd GLFN.

Sat Oct 1 , 2016
Noida: The Literature festivals generally call for classical and semi classical kind of entertainment programs as it goes well with the mentality and thinking process of writers and poets. A Sitar recital by Dr. Sudeep Rai was the second day presentation of 2nd Global Literary Festival Noida 2016 as the […] 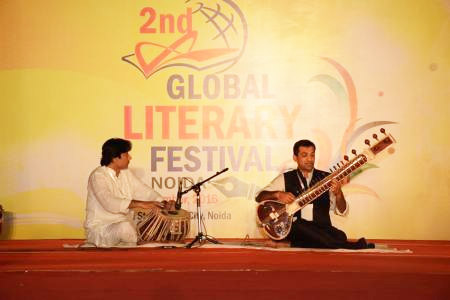