Noida: A renowned Japanese Film Maker Norihiro Koizumi screened his popular film Chihayafuru Musubi at AAFT School of Cinema, which was highly appreciated by the audience. The two-hour film has been the biggest grocer in Japan.

“We appreciate the gesture extended by Japan Foundaton for making us the part of on going Japanese Film Festival in Delhi and arranging the interaction of Cinema students with renowned film director Norihiro Koizumi. It was eye opener for all of us,” said Sandeep Marwah welcoming and introducing Japanese delegation to the students and teachers of Asian Education Group.

“We are lucky to see this film, we would have missed it if it would not have been screened at our campus. We students are much thankful to the cinema department,” said many students after the screening of the film.

“In japan we may not churn- out so many films as India do, but our films have now doing very well internationally. We are promoting our films through film festivals,” said Kaoru Miyamoto Director General of The Japan Foundation.

Norihiro Koizumi answered many questuons put up by students to know film details and the story and screen play methods. The director was accompanied by Masafumi Konomi Senior Project Manager Film and Broadcast Media Department.

A delegation from Switzerland at AAFT

Tue Oct 9 , 2018
Noida: A two member delegation representing the popular colleges of Geneva Switzerland were here at Noida Film City to meet and greet the faculty of Asian Academy of Film And Television to have better relation between two institutions. “We are keen in joining hands with AAFT and would love to […] 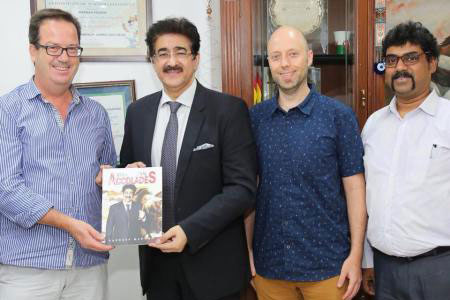