Noida: “International Labor Day — also known as May Day or International Workers’ Day — celebrates the struggle, dedication and commitment of the working class and is an annual public holiday in several countries. While many of us know it as an extra off day at work, very few are aware of its origins,” informed Dr. Sandeep Marwah Ambassador of International Human Rights Organization affiliated to United Nations while talking to the young aspirants of media at Asian Academy of Film And Television.

“The genesis of this day is in the labor union movement in the United States in the 19th Century, when industrialists exploited the labor class and made them work at least 15 hours a day. The movement involved protests that delivered a strong blow to the cycle of exploitation and made eight-hour working days a reality,” added Dr. Marwah who is also patron to IFUNA- Indian Federation of United Nations Associations.

Dreams Are Like Kites They Need to Be Weaved- Sandeep Marwah

Tue May 7 , 2019
New Delhi: An award function to honor all those women who have done well in life, was organized by a social organization Weaving Dreams under the leadership of Dr. Gagandeep Kaur Gulati at Hotel Taj Vivanta Dwarka at New Delhi. “True achiever is one who is ready to face all […] 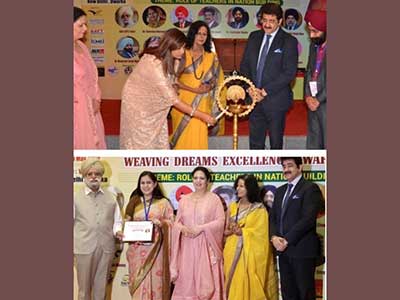