Noida, 15th September: â€œFreedom of speech and expression is the essence of any democracyâ€, said Sandeep Marwah, the President of Marwah Studios on September the 15th while addressing media students on the International Day of Democracy.

The UN General Assembly pronounced 15 September of every year to be discerned as the International Day of Democracy and motivated authorities to promote and consolidate democracy.

Democracies reckon on the belief that government exists to serve the people. It is an integral part of any political system in the present day as it empowers people to participate and to choose their representative, added Sandeep Marwah, the Ambassador of International Human Rights Organisation affiliated to United Nations.

Tue Jan 5 , 2016
â€œWe are One Family One God and looking for World Peace. A Peace Walk from Agra to Delhi only depicts our intentions to create awareness for peaceâ€ said Sandeep Marwah President of Marwah Studios and World Peace Development And Research Foundation. Himanshu Kumar AAFT student of Post Production decided to […] 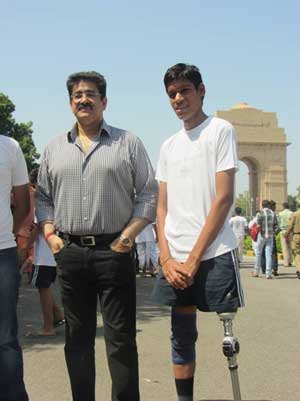