Noida: A book on international accolades of Sandeep Marwah was released in the campus of Asian Academy of Film And Television by the august faculty of AAFT.

â€œWe are proud of Sandeep Marwah who has brought the name of AAFT to international level. His contribution in media is now cannot be measured,â€ said Dean AAFT.

â€œSandeep Marwah is going to be the Vice President of India one day. I bless him and wish him all the best,â€ said Associate Dean AAFT.

â€œFive World Records has taken 30 years of his services to media and entertainment industry. It has not only benefited India but the whole World,â€ said Dr. Vijay Kapoor HOD Print Media, AAFT.

Sandeep Marwah is the most innovative person I have ever seen in my life. Creation of 100 organizations is not the job of an ordinary man,â€ added Prof. Satish Anand Dean Acting and Presentation.

â€œ60 International awards are not only difficult to achieve but may be impossible for some one else. He has done it,â€ expressed Prof. Arun Anand HOD Still Photography.

A book containing details of 60 international awards of Marwah from 28 countries of the World has been published with his five World records been handed over to every faculty member.

Media And Education Summit Planned by IACC with ICMEI

Mon Oct 24 , 2016
New Delhi: In the board meeting of Indo American Chamber of Commerce it was decided to have two more powerful events, which must be planned to project the challenges and opportunities in the fields of media and education. â€œI am working on two major international summits-Media Summit & Education Summit […] 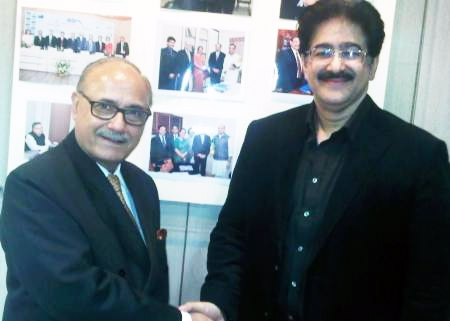