Noida, 19th April 2019 – Marwah Studios organised a seminar in the 3rd Global Fashion and Design Week (GFDW) based on the theme “Relationship between music and fashion” where delegates pertaining to the fashion industry were called to speak on the subject.

Rashmi Upadhya, a fashion designer, Vineet Modi, a fashion photographer, stylist and filmmaker as well as Ahran Chaudhary, a Bollywood celebrity, songwriter and model were among the panellists who were called from outside. The rest included Dean of School of Performing Arts (SOPA) Amit Kumar, Director of SOPA Dr. Manoj Agarwal.

Ms. Upadhya took the first chance to speak on the subject. She reportedly talked about the correlation of both music and fashion as both the entities are same and not different. They compliment each other. She also spoke about the different rock and metal cultures which started from the early days of Elvis Presley.

“Music is the purest form of art” quoted Mr. Modi as he took the mic afterwards. He spoke about the Beatles and how they lived vicariously among women during their golden days of fame and popularity. He also mentioned about Coke Studio and its recent version called Nescafe Basement.

Mr. Chaudhary made some interesting statements like “Music cannot be explained, it can only be felt” and “Fashion is not only with the clothes, it’s who you are” etc. making his stand on both music and fashion even more rock solid that both the things are integral parts of a person. Not one can be separated from the other.

Mr. Kumar added to the whole topic by mentioning the Indian pop band Euphoria and their dressing styles which reflected Indian-ness.

Lastly, when the mic came to Mr. Agarwal, he entertained the students with his soulful voice by singing “Yeh mera dewanapan hai” by Mukesh from the film Yahudi.

Also, Mr. Bhaskar, a faculty from SOPA sang when requested “Yeh kya hua” by Kishore Kumar from the movie Amar Prem leading the students into a state of euphoria.

Mementos were provided to the dignitaries by the college faculty in order to commemorate them.

Wed May 8 , 2019
Noida, 19th April 2019 – “Impossible Structure for Success” was the topic of discussion on Friday when Marwah Studios organised a workshop inside its premises. Rtd. Lt. Rita Gangwani visited the college to motivate the students about the various parameters at work relating to success. Initially, the workshop commenced as […] 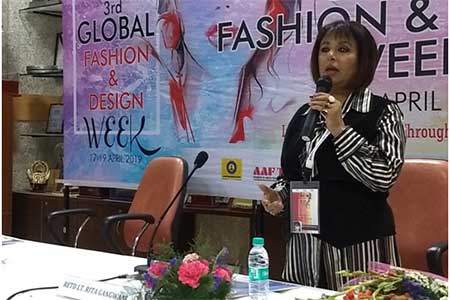