Noida: A grand show took place at Asian Academy of Film And Television, Marwah Studios Complex at Noida Film City for the formation and announcing the historical event of launching of a new organization to develop and promote relations between two countries Republic of India and Bolivarian Republic of Venezuela.

â€œIt is a long awaited plan of Government of Bolivarian Republic of Venezuela to create an association with Indian counter part to develop relations through films, arts, culture and media. This is a miracle when all together we could find under the one roof of ICMEI-International Chamber of Media And Entertainment Industry todayâ€ said H.E. Augusto Montiel Ambassador of Venezuela to India addressing a huge gathering of national and international film, television, media professionals and people from art and culture fraternity.

â€œVenezuela has a lot to offer in terms of art and culture. We have already opened a cultural centre in New Delhi. ICMEI is going to be the extension of our efforts. All are invited to be the part of now these two centres at Noida and Delhi. We have grown much bigger in one dayâ€ said Ambassador Appreciating the large network of 162 countries of ICMEI.

The renowned film, television and media personality and five times World Record holder Sandeep Marwah President of Marwah Studios was honored by the Ambassador and also nominated as the Chairperson of Indo Venezuela Film Association.

â€œIt is important to bring the relationship between two countries close to each other and films, art and culture is the best way to start with. At Bolivarian Republic of Venezuela we are proud of our choice of Sandeep Marwah. He is a well experienced media professional and he understands very well the cultural diplomacy,â€ added Ambassador.

â€œI am honored and now committed to the Bolivarian Republic of Venezuela. My energy will be used to built up powerful relations between the two countries,â€ said Sandeep Marwah who has earlier nominated as Global Cultural Minister, Global Peace Ambassador and International Media Guru on different occasions. Later Marwah honored Montiel with the patron ship of the IVFA.

Sandeep Marwah Honored For His Social Activities by UN

Mon Jun 6 , 2016
Noida: A tree plantation function was organized by the biggest educational group of India- National Institute of Open Schooling at their national campus at sector 62 at Noida in the presence of large number of senior executives, team of professors and teachers from all over India. Special placement was made […] 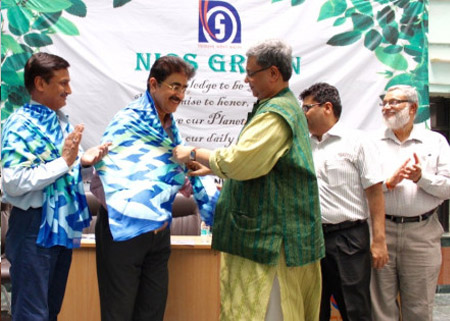