Noida: Another feather in the cap of International Chamber of Media And Entertainment Industry when Indo Serbian Cultural Forum was launched by H.E. Vladimir Maric Ambassador of Serbia to India at Marwah Studios.

â€œThis is the first of its kind organization in the country of Republic of India. I am sure that this forum will do wonders in developing and promoting relations between two countries,â€ said H.E. Vladimir Maric Ambassador of Serbia to India.

â€œSandeep Marwah is the best choice to lead the organization. His vast international experience and deep interest in art and culture will make this forum much stronger and permanent,â€ added Ambassador.

Sandeep Marwah has already been offered a Doctorate by International Roma Cultural University, Belgrade, Serbia for his untiring contribution to art and culture Worldwide. The Chancellor Dr. Shyam Singh Shashi has also nominated Sandeep Marwah as Chairperson of International Committee of IRC University.

H.E. Vladimir Maric Serbian Ambassador to India has joined as Chief Patron to the forum. I am honored to be part of this prestigious organization. The trust and the confidence which has been shown by the Government of Serbia on me will be maintained through out my involvement with this organization,â€ said Sandeep Marwah President of Marwah Studios.

The directors of International Chamber of Media And Entertainment Industry, film and television personalities and dignities from art and culture fraternity attended the event.

Asian Academy of Film And Television, Asian School of Media Studies and International Film And Television Club supported the event. A scholarship to the deserving student from Serbia has been handed over to the Ambassador in one of the short-term media courses at AAFT.

Tue Dec 27 , 2016
Noida: All India meet was planned AIHRA- All India Human Rights Association on the World Human Rights Day on 10th December 2016 at Noida Film City. Members and office bearers from all the states of India were present on the occasion to talk about their success stories and contribution towards […] 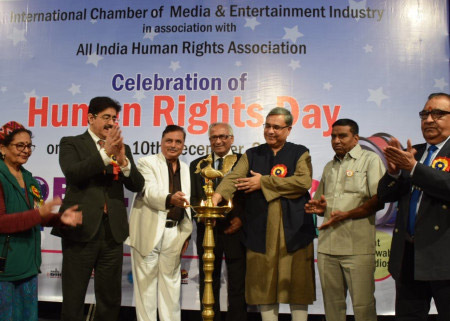